Tl;dr, he didn’t act like scammers I have met in the past.  He was polite and seemed sincere.  Most of the scammers I’ve met in the video game industry go into full-blown histrionics about how they’re great artists when they’re stealing assets or pumping out 32 games a year that are often re-skins of other games.

Not Michael.  He was so charming I would have given him my credit card if he asked.  A natural 18 on the charisma roll.  He answered my questions and criticisms to an admirable degree.

Of course, this is not conclusive proof.  The great grifters know how to use honey to catch flies.  Still, I would have said before talking to him that I was near 100% certain he was a charlatan who didn’t care about the genre at all or about writing.  After talking to him, I’m not swayed, but I think he made his case well enough that his remarks deserve to be heard after he made a sincere effort.  You can be the judge.

Also, any communications with me are private if done via a private channel (email, Messenger, etc.)  He gave me explicit permission to repost his comments.

But first, a digression

If you have read this blog, then you know that I always start off with a digression.  Today’s digression is an answer to the question, “Why does Hollywood produce so many stupid movies?”

You have probably noticed a trend where Hollywood repeatedly makes the same movie over and over again.  These movies tend to be loud and dumb.  Why not witty comedy or even intelligent action like Die Hard or Lethal Weapon?

The answer to this riddle is that these movies aren’t really meant for American audiences.  International spending on movies eclipses American spending by a significant portion.  If your movie requires subtle dialogue or intricate knowledge to understand, that doesn’t translate well.  Movies that can appeal to audiences with little understanding of cultural nuances or intricate dialogue do better than movies that are more “intelligent”, but harder to translate over.  This works both ways, I’ve seen amazing foreign dramas that are ruined when they are dubbed over.

Hence, movies like True Grit and Deus Machina don’t do as well as Transformers internationally.  It sucks that instead of the awesome Korean revenge movies like I Saw the Devil, Old Boy, and The Man From Nowhere, America is known for something different.

Now let’s transfer to LitRPGs.  Several of the top MMO games in other countries are games that Americans are not as familiar with.  This is Tibia. 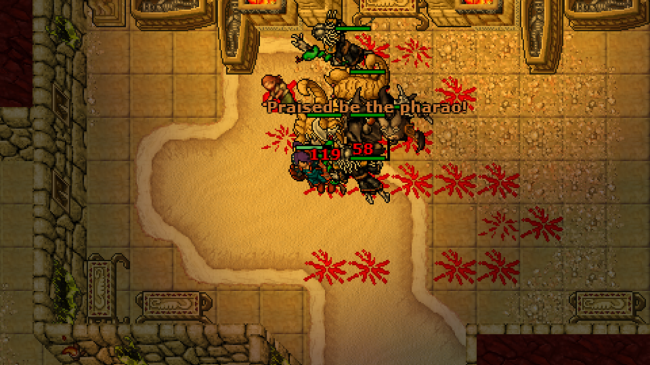 Don’t recognize it?  It’s one of the most popular games in Brazil and Poland.  Most countries are not as rich as America.  Most don’t have computers that can play next-gen games, and even if they do, the internet can be laggy. (*)

Additionally, most gamers are grown men, working long hours at the job, taking care of wife and kids, etc.  They simply don’t have the time to log in and play a videogame for hours on end like they did when they were children.

LitRPGs are a nice sort of compromise for this sort of person, and even for a guy like me who works 60 hours and doesn’t really have time to play all the video games I want to play.

LitRPG is a nice genre for gamers who can’t game all they want, which is most of us.

The amount of interest in the genre has grown over time.  I often chuckle because on several of the LitRPG forums, people talk about it as if it’s a minor sub-genre.  This is delusional.

Completely unknown authors are sitting at 4 star releases with at least a dozen reviews.  By my Amazon updates, the amount of new books in the genre are almost two dozens per week.

For most new authors in fiction, the idea of entering into a genre as an unknown where dozens of new books are being made in it and getting dozens of positive reviews for a book that’s been out less than a month and has no budget or publicity is astounding.

A lot of these books are also bad from a book craft standpoint.  As with big blockbuster movies, several of these reviewers are ESL (English as Second-Language) and are looking for a book that scratches a particular itch rather than a good book.  If AKU disappeared and books had to be bought, I’m willing to bet these reviews would dip down dramatically.  (The most common defense of some of these really bad books that I get is that they’re free.  Which, no, they’re not.)

The result has been that several authors on other genres have recognized this digital gold rush and begun publishing LitRPG books.  Or sort of LitRPG books. Ramon Mejia of LitRPGPodcasts has been a sort of standard bearer against this.  Almost all of his negative reviews are against authors who don’t publish on any of the LitRPG forums and appear to be attempting to cash in.

Against authors who are on LitRPG or LitRPG Society, he’s been far more generous.  I can guess there’s a lot of reasons for this.  He loves LitRPGs, he considers his role to be a guy who gets people excited for new books and being a critical reviewer is sort of the antithesis to that, he’s an author himself and doesn’t want to start flak, and he doesn’t want inter-authoral drama on the forums.

But the downside to this has been a newer wave of authors from other genres recognize this and join up on LitRPG or LitRPG Society and start posting.   Usually their first post is to the effect that they have a book on RRL and want you to check it out.  I’ve noticed that LitRPG forum on facebook has gotten more hostile recently to authors who only appear to promote their works, so I am guessing I’m not the only person noticing this trend.

To be clear with my position on this, I honestly don’t care if an author is only interested in promoting their work, so long as that work is actually good.  I give more leniency to authors who are complete amateurs and have a huge love for a particular genre than an author who has been writing for a long time and is writing for a new genre.

So Michael came to my attention because other authors and posters on these forums singled him out as exceptionally bad and as someone who did not care about the genre.  I’m a bit amazed at how many people talked trash about him behind his back and then have him as facebook friends.  Jesus people, have some convictions.

Being someone’s facebook friend is generally seen as an endorsement, so if you want to say that Michael is the worst author behind his back and then befriend him, you’re more than a touch on the hypocritical side.

Anyway, I gave the benefit of the doubt for the book since this could be sour grapes.  There were numerous red flags though.

The book reminded me of stories I’ve read from college students that were written in a single day on a redbull filled rampage.

So, here’s the responses.

The reviews on your books match fake reviews I’ve seen before.

This person above also wrote some fake reviews for LitRPGs.

The one thing that might be a correlation is people from RRL coming over and reviewing it… the more I think about it the more that would make sense. I’ve got a nice following there from putting out my books ahead of time so that more people would be able to access them (and to find out if people enjoyed the story).
haha yeah I don’t think I’m going to be pulling dr freeze out to review my books

On The Tonal/Authorial Shift in The Trapped Mind Project.

I didn’t mean for Emerilia to become a book at first I was using it to take a break after writing the harmony war series (rather dark, deals with ptsd, realistic violence, death and such) I sent it to one of my betas he liked it and I gave it a shot its slow due to not only Dave learning the world, but me as well (reason 2)…
Harmony War and Emerilia are very different in a lot of ways, mainly the characters their dispositions, also the matter is much darker in Harmony. Also the tech in harmony is all factually based, Emerilia, much more hand wavium. People wanted the sword and sorcery, scifi was the cool medium I could use to bring that into reality

As for the production rate and process I write 6k words a day, then goes to my proofing team, then onto rrl then I listen to comments note down what people have said in what chapters, spelling or things that don’t make sense, I chabge immediately. Once the book has been up for a while and comments are in I copy it back, add in scenes I’ve thought of to solve people’s questions, then send it to proofers again so that the plot makes sense, finally to my editor, she finishes it up and then I can put it on Amazon…

I’m not going to say that I’m the best author out there, I’m not and I am trying to work to get better at my craft. Are my first books bad… yeah but I’ve been working to clear up the issues I’ve had, which is why I was interested in your criticisms but wanted to let you know of the story behind it

Everyone has their opinions, I’m just trying to inform you of my position

On the recent entry into the LitRPG forums.

Well I actually was in LitRPG groups since… I think October of last year when I read Awaken, then The Land, Delvers, went to RRL and through all of that. Emerilia was a
fan fic of a few things (Oblivion, Skyrim, Stargate, D&D)

My impression of his book hasn’t changed any, even if I like him more than I did initially.  If he wants to be a good author, it requires taking time, throwing away entire sections and rewriting them, plotting and outlining, and spending a lot of time writing and rewriting.  Otherwise, he’ll be a genre writer.  Not that it isn’t lucrative.

Not that this isn’t lucrative.

(*) This is why torrenting is still popular in many countries, because streaming is not possible with their internet connection speeds.

1 thought on “A Conversation With Michael Chatfield”