So there’s more drama in the community, with the usual person, Aleron, being at the center of it.

Aleron is known for hammer-banning, I posted this up in my review of the trademark case as a reason why people don’t trust him.  Before reading the rest of this, go over that post to get the context for everything happening in this one.

As is also typical, he didn’t bother talking to anyone and only responded to someone friendly to him.  Every time I’ve asked him about something, he has never responded.  When someone he thinks is friendly to him asks, then he’ll respond.

Travis said that he uses an assistant to moderate his facebook friends, not surprising since he’s a lawyer and very busy right now with the new tax law going into effect.  Facebook “recommends” people for you to befriend.

Is Aleron and his mods unaware of this?  Here’s my friend request/recommended friends list.

Facebook loves this feature so much they have it twice:

And even three times: 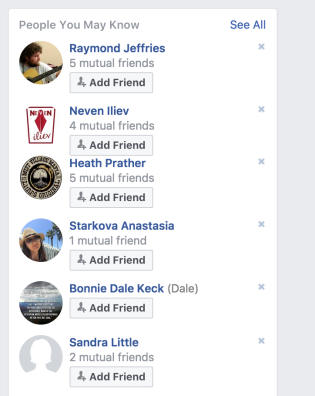 Once on your home screen under “friends”, another on a top tab bar with a person icon, and a third time on the right-hand side with recommended friends.  So it seems like the Book of Faces thinks finding friends is a very big deal.

Also, for funs, all of the people Facebook is recommending to me are members of the LitRPG group because we have mutual likes and interests.  Coincidental, right?

Note that it just says that these people just have mutual friends and/or interests.  As you can see in the case above, I was able to hit the “decline” button on befriending two people, and it gives me the option to mark it as spam.  I was not traumatized in any way by hitting no.

So this is just a normal facebook feature.  Aleron has used this same excuse when the first of the schisms occurred, when he banned Blaise Corvin.  His excuse for banning Blaise was that someone on Blaise’s group, not even Blaise himself, was befriending people and recommending them to join the LitRPG society page.

Assuming it was true, I have a simple question that I can’t get Aleron or his mods to answer.  What is the harm in this?  As I’ve demonstrated, it’s not hard to stop, you click a button that saves “deny”, then the person disappears.  If you are in real distress, you can even report it as spam.

The important thing, none of this has anything to do with groups.  So why is it a group ban to use a feature that’s not even part of the group?  Do these people know how to internet?

Second, what’s the parade of horribles here?  To ban someone, it’s done with the presumption that to not enforce a ban would cause some cascading set of bad actions.  Not banning someone who is being abusive will lead to more abusive comments, allowing people to self-promote without approval will lead to floods of promotional material flooding the board, etc.

So what is the unspeakable horror of allowing people to friend other people?  We’ll have… people who are friends with each other?  I’ve seen some real pearl clutching in my day, but this one now tops that list.

The only explanation given is that they think that Travis might attempt to put people on his email list.  Okay.  If he is abusive with it, his email provider will shut down his promotions.  There’s a variety of laws that regulate that, in the EU, it’s illegal to even send someone a marketing email without prior approval, and the US requires that there’s a way to unsubscribe.  Even ignoring that they have no proof of this assertion, and that which can be asserted without proof can be dismissed without thought, that still isn’t exactly a league of horribles.

What is far more likely looking at the timing of this is that every time Aleron bans someone, it’s when they’re doing a side project outside of his LitRPG group that starts to get successful.  Blaise Corvin’s group got successful, Aleron banned him.  Travis has started a new group called Book Brawl that features new work on it.

So, you ask, what’s this all about then?  I think it’s pretty simple.  Aleron attended a conference, or listened to some speaker, or read a book that told him that working is for suckers.  Real cash isn’t earned by working and producing things people want.  Real cash is earned by extracting rentier profits, or earning a cut of other people’s work while you do nothing.  (This is more euphemistically called “passive income” by money gurus).

You can go watch The Founder about the history of McDonalds if you want to see how this works.  More great authors keep entering into the field, and eventually, a series like The Land is going to be seen as mediocre.  When that eventuality arrives, Aleron is going to need a new form of income.  So we have this exhibit.

This is the new LitRPG group signing in page, which is essentially just hawking merchandise and trying to say, “This is where real LitRPG is.”

Also, I have to point this out, Aleron is accusing Travis of trying to build an email list, which Facebook doesn’t allow unless you put it in your contact information.

Aleron has to ask on his group page, screenshotted above

Holy hypocrisy Batman!  Aleron is trying to get people to fork over their email and then has the balls to accuse other people of doing it.

The entire group joining page for the group basically says, “Give me your email and buy my merchandise.”  How exactly is this helping the LitRPG community at large?  Simple, it isn’t.

Aleron is offering access to his group and website as a means of promotion, so if there are other venues for promotion that don’t go through him, he’s going to do his best to shut them down.  He’s also obviously trying to acquire that secondary meaning for “LitRPG” to bolster his Supplemental registry claim to a Principle one.

It’s an old scam known as the Rainmaker scam.  Someone, a “rainmaker” offers you access to something that would happen with or without their “help”, but they collect a fee from it.

For all his faults, Aleron has a keen, (if entirely unethical), sense of business and promotion.  He’ll hit any person that running a group that looks like it’ll be a rival to his and ruin his future business plans, simple as that.

Hence for a guy who’s supposedly about promoting LitRPG and who constantly styles himself as the king of positivity, he has banned most of the successful LitRPG authors off his page and seems far more interested in promoting himself than in promoting LitRPG.  Either these are all wild and crazy coincidences, or we can assume that he has a game plan for this.

3 thoughts on “LitRPG problems again, when to ban”