I wrote an article about not plagiarizing, which I thought was kind of commonsense advice.  So now we’re going to talk about branding and netiquette, which will ensure that other authors don’t hate you and protect your work.

First, obvious disclaimer:  None of this is legal advice and should not be construed as such.  Second, if you’ve been directed here from a forum, you probably did something stupid.  Skip to the bottom on netiquette protocols.

Thinking about copyright, branding, and legal protection is going to be a sad part of your life if you work as a creative because people will steal your work.  Even very rich people will steal work, like Spike Lee stealing Juan Luis Garcia’s work.  This is the dark underbelly of creative work.

This is why creative’s will often seem cagey or hostile to newcomers; they’re trying to gauge what it is you want.  If you’re the naively trusting type, be aware that every corner of the creative market is filled with scam artists from fake editors to artists faking designs to publishing companies looking to skim a portion of your income.  There’s a lot of landmines to navigate as a creative and you should exercise due caution.

You should think about your brand from the first novel you produce.  I hate to say this because I have no love for marketing and marketers, but it’s how the law works. Attempting to brand after the fact can be legally difficult, in some cases, impossible.

Now, the downside to branding early on is that it’s going to cost you a bit of money upfront, which is a scary proposition for a book you aren’t even sure will sell.  Pouring hundreds of hours into something, putting money into it, and then seeing it fail is a lot of bitter pills to swallow.

An example is Tokyo on Foot. 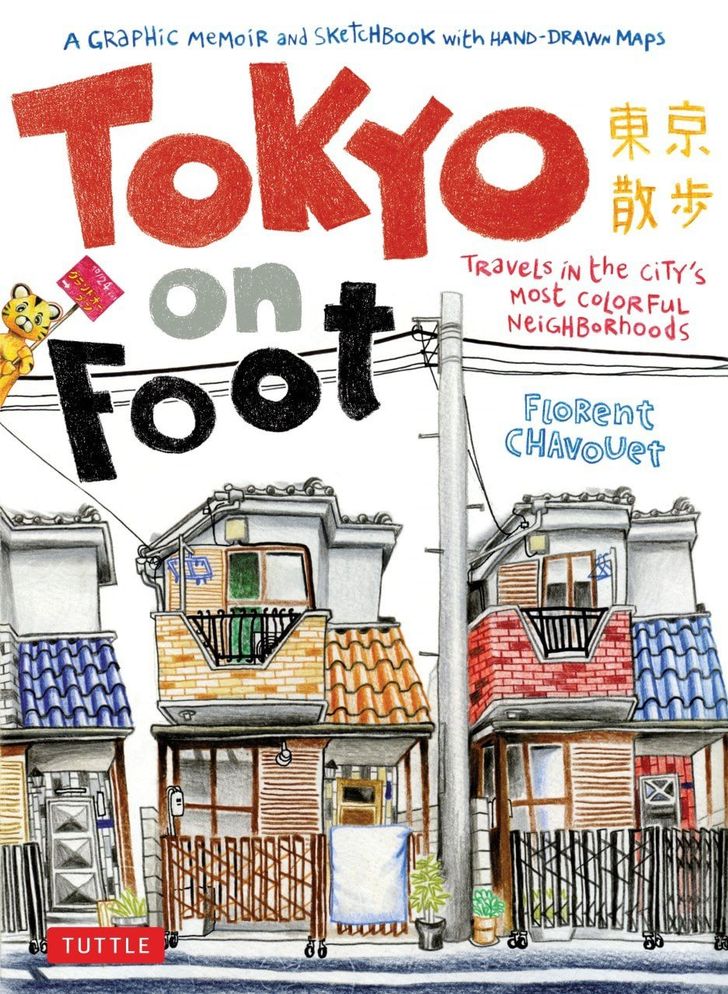 You can see in Florent Chavouet’s work that the hand-drawn cover look is his brand, but he could easily get the (X) on Foot copyrighted due to its specific look.

Using fonts for branding is tricky.  Every font comes with a license.  On a mac, it will looks something like this:

The most important part is the License.  For Fira Code, it’s licensed under the Open Font License.

The Open Font License is a copyleft license, which means that any alterations to the font or its use cannot be used in a copyright, all font usages must remain under the Open Font License.  Other websites have different criterion:

Can I trademark a design I create using marketplace items such as a logo?

You may not register as a trademark the Item or the end product incorporating the Item — not even logos. If you use the Item to create a logo for yourself or a client, keep in mind that third parties can use the Item too, even in another logo.

Unless you’re willing to shell out money for a special font, it’s most likely going to have a lot of provisions about its use.  This means if you want to apply for a copyright protection on your work using the font, it’s not going to work.

Any ways around this?  One way is fonts which allow modification.  A designer can turn a font into a vector shape and tweak it into a new design.  This changes it from a font into an image that you can distribute as a logo.  The bottom line is that you’ll need to check the licensing to see what you are and are not allowed to do with a font.

You can get one without the other, but the more distinctive something is, the easier it is for fans to recognize and for the court to enforce.  Unscrupulous people will be tempted to make things look very similar to your stuff (remember the warnings up top), and getting both the plain and stylized version protected is a way to help yourself.

The best names are made-up or ones that are not in common use.  Viridian Gate by James Hunter is a good example, as that name isn’t in common use for GameLit books.

If you can’t get a name that’s unique, try a sequence of words that are unique. Using something that is too generic will get you accused of trademark bullying, which will land you in hot water in the writing and reader communities.

You want as indisputable a case as possible, because the truth about copyright law is you never want to actually have to take it to court.  It’s a long and expensive process.  The more foolproof your case, the harder it will be to refute and that tends to keep it out of court.  People don’t like going to court and paying the costs if they don’t think they’ll get anything out of it.

You also want to get the sympathy of the community on your side.  The more it looks like someone plagiarized your work, the more sympathetic the community will be.  Don’t underestimate the ability of a community to rally support for you and to get rid of someone unscrupulous.

There’s myths about copyright.  In theory, your work is copyrighted as soon as you create it.  In reality, you need to prove you own something.  In the US, it’s only 35 dollars to copyright a work if you are the sole claimant.  Things about “poor man’s copyright” are myths.  Just shell out the 35 dollars and breath easier.

I see people get the purpose of a cover image confused many times.  A cover image isn’t intended to show off someone’s artistic merit or talent, it’s to entice readers to pick up a book.  This means a cover that might look generic can be a better draw to readers than a unique cover.

If you’re doing urban fantasy, the cover is going to look something like this: 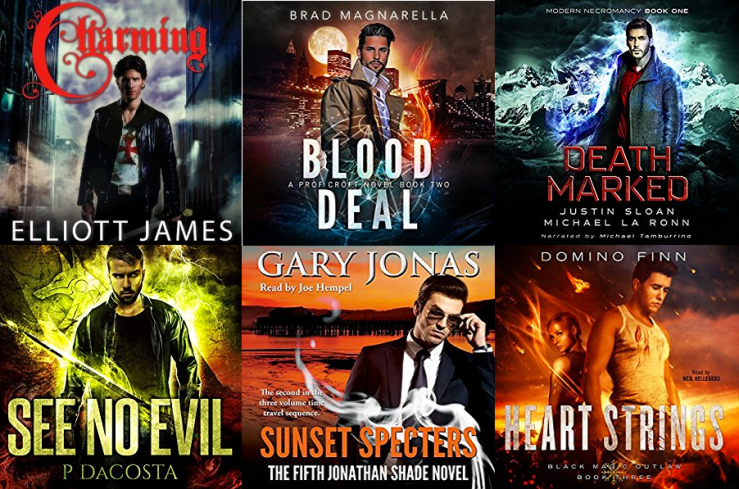 Not like this.  James, not like this.  ** Mudman is a great book, but it’s also James Hunter’s worst selling book.  You know what you should do?  You should buy it.  It’s seriously good.

Likewise, your covers should maintain a consistent look and feel through them, unless you’re doing a rebranding.  Matt Dinniman did an awesome new cover for his new book:

Still, you generally want to keep a consistent look to the book covers so people understand that a series is connected.

What you really should not do is copy someone else’s cover or artwork.

Because no matter what you say about how they’re different, everyone is just going to see them as the same.  From a branding perspective, you can’t build your brand off of someone else’s.

Remember that the biggest risk as a creative is that someone is going to steal your work.  So, the number one way to win friends and influence people is to not look like you’re just there to do market research or steal things.

What to do then?  A few suggestions will help, h/t Blaise Corvin:

Simple rules. Be respectful, don’t scam anyone, (or act in a manner that makes people think you’re a scammer), and show that you’re a fan of the genre.  If you fail to do that, don’t be surprised if you’re given the boot and/or a less than friendly greeting.

We also need to talk about ghostwriting and hiring a ghostwriter.  One of the things that I learned from doing reviews is that regular authors really hate write-to-market authors.  This isn’t any regular anger either, it’s the sort of sublime anger that Martin Luther wrote about:

I find nothing that promotes work better than angry fervor. For when I wish to compose, write, pray and preach well, I must be angry. It refreshes my entire system, my mind is sharpened, and all unpleasant thoughts and depression fade away.

There’s two main reasons for this that I’ve found.  The first is that when a write-to-market author starts targeting your niche, you get a deluge of books in that niche, usually of average to subpar quality.  That results in a drop in sales for the regular author, and increases genre fatigue in the general audience.

As an analogy, think of games.  First it was FPS everything (during Halo) then third-person shooter everything, then open-World sandbox everything, battle-royale everything or zombie everything.

After the initial flood, most of the subpar authors will disappear back into the void until they find the next hot niche market.  Regular authors might have to put up with a few lean months, but that’s a sad reality of writing.

The other problem is a bit more nefarious. One of the most prolific professors in America is Harold Bloom. I don’t like using him as an example because his style of literary criticism, (focus on the work, not the author or the politics), is one that I tend to adhere to.

But, at his peak, he employed 16 full-time staff members as well as tons of graduate students, who helped amplify his output.  It’s fairly open knowledge that a lot of his work wasn’t done by himself, but by graduate students.  The problem of grad students having their work stolen is a big problem in higher ed.

One of the keys to being a write-to-market author is that you have to move fast and very few authors are that prolific, particularly in genres that they aren’t familiar with.  To get around that, many hire ghost writers to spread the load and to enable themselves to rapid fire publish.

Nothing wrong with that per se’, but imagine the scenario.  You’re a ghost writer who has been hired to write a book in one month in a sub-genre.  Most likely, you’re not being paid a huge amount for this work, so you have no reason to invest any serious time/effort except enough to write something passable.  You flip over to the amazon list of bestsellers in that subgenre, grab a book, and presto!  You can now “write” a book in just one month with a nominal amount of effort.

What happens if you get caught?  Who cares?  Whoever hired you won’t admit to having hired you and they signed off the book with their name on the cover.

The closest analogy I can think of is asset flipping in video games, where people take a premade game, make little to no changes to it, and then resell it to a garbage asset collection like PlayStation Store or Steam.

The only cold comfort there is that I’ve personally never seen someone succeed using this method.  Scam authors come in for a quick buck and usually exit just as quickly as they enter.