So I’ve been watching animes recently and several of the shows, even the ones I like, fall under the use and abuse of tropes.  As a refresher, tropes are often literary shorthands for conveying a scene’s idea.  An example is several shows have a newcomer who initially butts heads with an old military general, until finally, the general comes to respect the newcomer as a member of whatever city or kingdom the story is based on.

What’s the purpose of that trope?  The military is usually the most conservative faction of any government, meaning they are the most likely to be suspicious of outsiders and change.  An old, battle-hardened general means someone who has a strong heritage of duty, honor, kingdom and country.  By getting this person to believe in the hero, it stands as a surrogate for the kingdom/nation as a whole.

The abuse of a trope occurs when a trope gets used without understanding the exact purpose of the trope.  Another, though less egregious violation, is using a trope when an original solution could convey the emotional tone of the scene better than the trope.

The most abused trope in anime is the “Oh my God, I’m a reclusive shut-in and now a bunch of women want to have sex with me!”

Our first minor offender comes from the series Overlord, which has this annoying trope.  However, it is being used correctly.  The person roleplaying Overlord is a complete loser.  He’s a workaholic who then immediately goes home and plays video games.  What does he do in video games?  He hangs out with his friends.  Even when they’re all gone, he hangs around his guild hall hoping one of them will show up.

So it’s used correctly, what’s the problem?  The problem is that there are at least two better options that would make the story more compelling.  The first option is that he’d undead, and hence, has no anatomical body parts to do anything with a woman.  This would also make his angle with programming her to love him make more sense.  It would be extremely upsetting to want to have sex your entire life, finally be offered a beautiful woman on a platter who has undying love and loyalty to you, and you can’t do anything about it.

The second more compelling way to deal with it is to make his “I’m growing colder” problem manifest itself.  As the story stands, that statement has no impact because we never see him change his behavior.  Now, if he finds himself unable to feel anything emotionally for a woman because of his body change, that adds emotional weight to the story.  He’s a guy looking for love his whole life and now that he has it, he’s physically incapable of doing anything with it.

Both of those solutions add more emotional weight to the problem the MC is going through.

Another minor violation of this is in Is It Wrong to Try to Pick Up Girls in a Dungeon?  Here, the MC isn’t an otaku and women throw themselves at him as soon as they see him.  Which ok.

Why is this stupid?  Because the storyline has already been established that he’s trying to win over a woman who is much more powerful than himself.  If he instead said that no matter how tempted he was, he would never date any other woman until he found out if the woman he was interested in loved him back, it would add to his emotional arc and the overall plot of the story, which is that love makes you stronger.

Short review, you should watch Is It Wrong to Try to Pick Up Girls in a Dungeon?   It’s one of the few stories in the Isekai genre where the MC isn’t an overpowered badass who can do anything by simply blinking.  This also adds more weight to the romance storylines since we can see, via his struggle, why the women find him attractive.  (Even though it usually only amounts to “He’s super cute!”).

But the worst offender of all is How Not to Summon a Demon Lord.  This is the holy grail of trope abusing shows.

Here, the MC is the “poop my pants if a woman blows on me” otaku, but he’s literally sleeping, every day, with two women who say they will do anything he wants.  But he still acts like touching them is a huge deal.

In my “Use and abuse of tropes”, I state that abuse occurs when “The author needs the trope, instead of the story.”  What do I mean by that?  The one-note joke of the series is that the MC freaks out everytime he gets near a boob.  That’s the only reed this story can blow upon, and blow it does.  If they resolved this storyline the way it naturally would if anyone found themselves in this situation, then the writers and animators couldn’t use their one and only joke.

Not understanding a trope and using it is akin to only knowing the punch line to a joke without knowing how to do the setup.  It’s the difference between a comedian and a failed comedian.

Another terrible abuse of the trope is when it comes to the elf princess.  One of the two women that the MC finds himself with is a secret princess.

The “secret princess” trope was done best by Chrono Trigger and princess Marle/Nadia.  Marle is a tomboy that dreams of adventuring rather than being a princess.  So she escapes the castle and wanders around town looking for adventure. 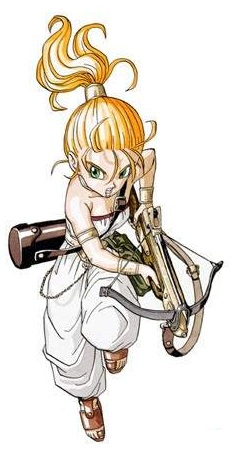 A similar character is Ciri in The Witcher.  The way this trope is supposed to work is the princess only thinks about herself and having a fun adventure, but along the way through her journey, she realizes that if a bad ruler takes over, the citizens will suffer.  Thus she resolves to become a good leader and fulfill her princess role.  That’s the trope.

However, in How Not To, the princess is effeminate, lazy, stupid, gluttonous, and acts like a slut, though the show also hints that she doesn’t understand sex because she’s stupid you see and this and the other girl has small boobs are the only other jokes in the show.  In short, she’s exactly the sort of person who would dream of being a princess.  Unlike the tomboy trope, she is temperamentally perfect for being a princess.

Instead, we are told when Plot needs to happen that she’s a princess and she doesn’t want to be a princess because reasons.  Seriously, she just says, “It’s better to make your own path.”  Which ok, if that were her actual character motivation.

Except every time we see her, she’s eating, sleeping, and never proactively doing anything.  Even when she gets kidnapped, she doesn’t do anything.  Nor does she appear to learn anything from her journey, which means she never undergoes any sort of character arc.

What could save this?  Honestly, nothing. The show has so many problems that fixing it would be like trying to make a sophisticated Michael Bay film.

If the trope were to make sense they would switch which character is the princess since the other one, (self-motivated, determined, hard-working) is the sort of person who would balk at having other people do things for her, not the person who spends all of their time sleeping in bed and doing whatever other people tell her to do.

Unfortunately, while I can hope to reach Gamelit/LitRPG writers to make my pleas, I can’t do that in the anime/manga/light novel world.  The good news is that many of the GameLit writers started doing so because they wanted to see the stories in anime done better.  Maybe we can get an American company to make an animated story out of one of the series.

Anyway, the point is that if you ever feel a need to reach for the “OMG I’ve never interacted with a girl before” trope, I have a simple mnemonic device that will help you.

So long as you remember that simple mnemonic, you will be able to write protagonists that readers and viewers won’t want to beat to death in a dark alley.